Scooter Cannonball Run starts tomorrow in Hyder, Alaska. Los Angeles scooterist, Eric Almendral and his 1987 Honda Helix CN250 will be among the anxious riders at the starting line.  Eric is a long time Scooter Cannonball Run fan who will be making his inaugural SCR ride. I had the pleasure of chatting with Eric via Facebook before he headed to Alaska.

Karen: Why did you decide to do CBR?

Eric: After a few years of following as a spectator and having a lot of friends ride it, I'd actually decided that CBR was not for me. My thought was that if I was going to take the time and spend the money I'd rather take my time and let myself be a tourist. I'd even started planning for a "where can I get to and back from in 10 days" ride. (I'm not going into this as a tourist; I'm really in survivor mode.)

The route is what changed my mind. It's highly unlikely that I'd do that part of Canada on my own. And, to be honest, the scope of the challenge this time appeals to me. It's not as if previous CBRs have been easy, of course.

Maybe it’s some kind of mid-life compulsion to test myself.

Karen: What the furthest you’ve ridden your scooter? First scooter?

Eric: I tend to think in terms of time on the scoot and the type of terrain rather than miles because not all miles are created equal. Regardless, nothing I’ve done compares to what’s ahead of me in a few days.

Longest trip is about 1,000 miles over several days. I've done 350 mile days, 220 miles of nothing but twisty mountain roads, days of 12 hours in the saddle.

Karen: How did you prepare for CBR?

Eric: Half of it was obsessive research and shopping. That's almost true; I own a lot of gear yet replaced almost everything for this. All my stuff was great for commuting or a few days down the coast but not for handling a greater variety of weather than we see around here. I'm also very concerned about the heat we'll experience the last third of the ride, when we're already fatigued. So a lot of it had to do with trying to stay cool and comfortable — mesh pants, base layers. I now understand the importance of "moisture wicking."

I spent a lot of time working on the scooter, which really didn't need that much. But getting in there and getting familiar with it helped boost my confidence.

I didn't do the amount of physical training I'd intended to, which I'm sure will bite me in the ass.

Karen: Why did you choose the Honda Helix as your Cannonball bike?

Eric: My friend and Helix guru Mike Smith has run three CBRs on Helixes. It was a combination of talking to him, the scoot’s legendary reliability, parts availability and the fact that you can get one pretty cheap. I’d have loved to ride my LX, but between all its performance mods and its high mileage, there’s just too much that can go wrong. Last week a vacuum hose failed. An easy enough fix but the kind of thing that could screw you on Cannonball.

I also have a Stella but it doesn’t handle altitude well enough.

Eric: Mike Smith has a custom oil separator hack he uses to deal with a common issue with the Helix airbox. It’s a clever solution from common hardware store parts. I added a 12v outlet to the dash to power the GPS and iPhone, iPod or whatever else. I put in a carburetor bracket that was stock on later years of the scoot. And I installed stiff clutch springs and put sliders in the variator.

I also added a light kit to the top case because the Helix’s rear lights are very low, like the scoot, and not that easy to see.

Other than that, I kept it stock. It’s not fast but it’s consistent and its got a heart of gold. Though I’ve no expectations of winning this thing, I do think slow(ish) and steady will be a lot easier on me.

I could be cursing the damn thing on the side of the road in the middle of BFE, Canada in a few days, though. I’m not taking anything for granted.

Karen: Any favorite section of the route you’re looking forward?

Eric: Since I’m surrounded by mountains and canyons here, I love riding the twisties but our mountains are molehills compared to what we’ll be going through in British Columbia. It’s pretty much all calendar-shot scenery until we get into Montana. Then it’ll be a variety of wide open plains and the American Rockies. That’s about six days of riding!

Eric: About 1300 songs of reliable favorites. For me, that means a lot of ’80s New Wave and ’90s college/indie rock mixed in with smatterings of various other genres and some newer stuff. I just didn’t want anything that made me think, “Ugh, why did I put this on here?” and wanted to keep the track skipping to a minimum.

If that sounds like a cop out because I didn’t mention bands, then: T. Rex, Talking Heads, Echo and the Bunnymen, Jesus and Mary Chain, Stereolab, Elliott Smith, Portugal the Man and Hot Chip.

Eric: Nuts. I could probably live, for a short time, maybe, off nuts. I’m bringing two big bags of individually wrapped assortments with me. (Unsalted, so I don’t get thirsty.) I’m also trying out protein bars for something a little more substantial that supposedly provides energy.

Karen: What does your family think of you doing Cannonball?

Eric: My wife has been ridiculously, amazingly supportive. She also knows me well enough to know in advance that I would break my budget, spend months obsessing over this and talking about little else, and will probably spend the month after I get back talking about it. She admitted today that she’s in denial about some of the risk involved and that in six months she’ll realize she should be more concerned. She then said, “It’s okay if you break an arm or something like that.” Uh, not really!

I’m not really sure how aware the rest of my family is when it comes to exactly what I’ll be doing and the scale of it. I’ve taken plenty of trips to go to Amerivespa or other rides and rallies, so they may not know the difference. I suspect their reaction may be similar to many of my coworkers: “Why would you do that? But why on a scooter?”

Eric: I’d be lying if I said anything other than, “Post to Facebook then call my wife.” In that order, of course.

Thanks Eric. Good luck and enjoy the ride!

It's that time again. Scooterists from across the globe gather to see if they have what it takes to conquer the Cannonball challenge. For the uninitiated, Scooter Cannonball Run is a coast to coast endurance rally for motor-scooters under 250cc that is held every two years. This year's route begins in Hyder, Alaska on June 3rd and ends ten days later in New Orleans, Louisiana. It is not a race. 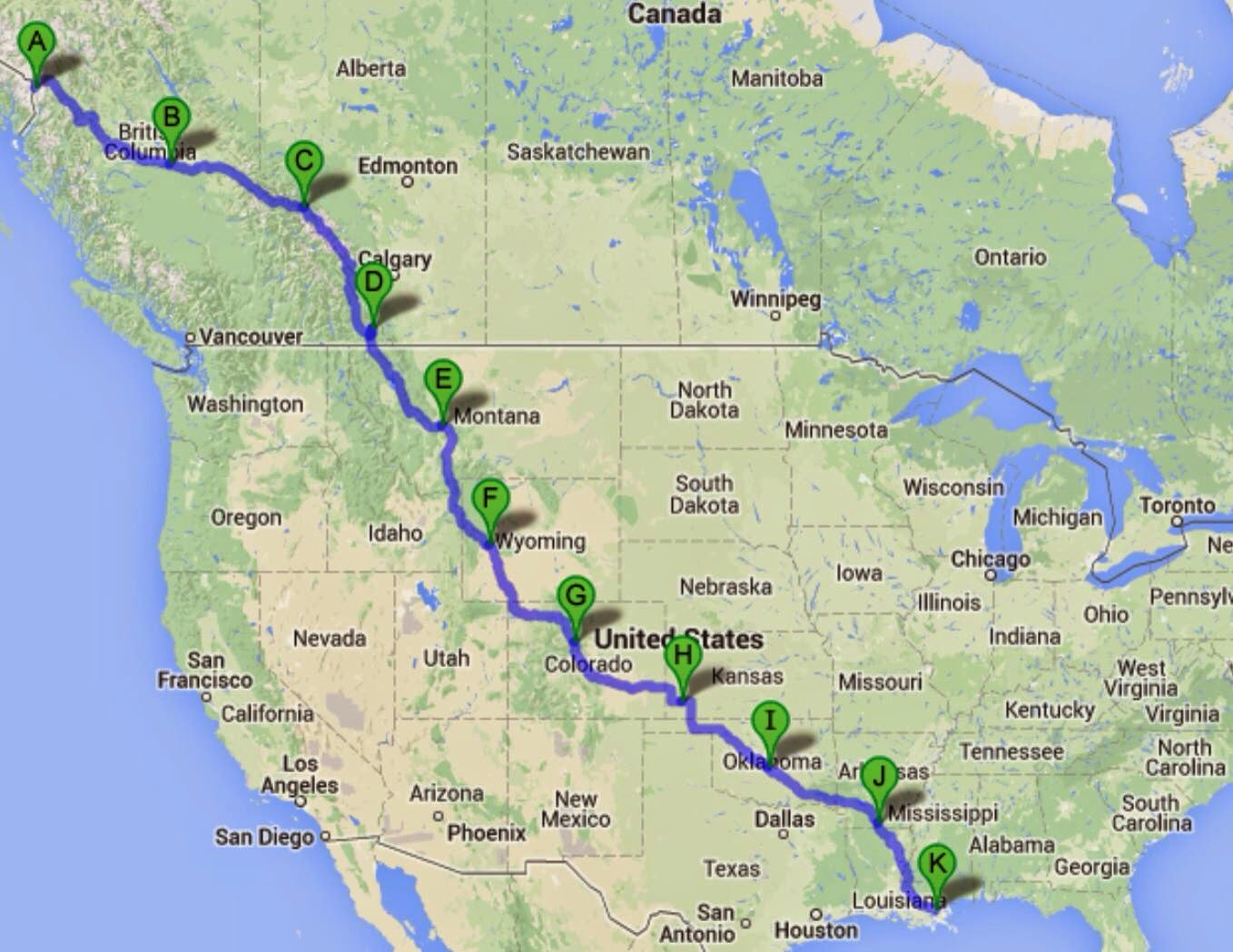 I had the privilege of completing Scooter Cannonball Run back in 2010. It was an amazing experience full of emotional highs and lows that was rewarding on so many levels. I'd do it again in a heartbeat. But because of poor timing, I have to make due with cheering on this year's Cannonballers. My fellow 2010 Cannonballer and winner of the 190cc class, Matt Benintendo recently spent a few days in Portland, Oregon before heading up to the starting line in Alaska. I had a chance to chat with him about his 2010 and 2012 Cannonball experiences.

Matt: The 2010 Cannonball had a lot less riders than in 2012. There was more of a family feel amongst the riders in 2010 even though I knew a lot of people in 2012. I rode mostly alone in 2010, so for 2012 I rode cross-country with other people. Riding solo is boring. I liked riding with 2 to 3 people. Of the two Cannonballs, 2010 was a more scenic and challenging navigational route. In 2012, I did enjoy riding through Joshua Tree National Park. Also, we rode through "Tornado Alley" and saw all the damage. Our Cannonball wasn't affected by it, but I found it fascinating to see the aftermath firsthand.

Karen: I heard you had a co-pilot for the 2012 Cannonball.

Matt: Yeah, Mr. Happy. I got him in 2010 at our Aerostich stop in Duluth, Minnesota. He has quite the following online. He's coming along for this year's Cannonball.

Karen: What have your past Cannonball experiences taught you?

Matt: Get better rain gear. I was soaked in 2010. I also fell asleep two times in South Dakota and woke up to the sound of rumble strips. Wish I had music back then.

Karen: What are you looking forward to this year?

Matt: I'm looking forward to riding in new states and avoiding Texas. I've never been to Alaska. Everyone on two-wheels wants to go North to Alaska. Not looking forward to the wide range of weather and temperatures. It makes gear selection interesting. I like that the route ends in New Orleans during Amerivespa, so I can continue my vacation and see familiar faces I only see ever two years.

Matt: I had a lot of guidance from Joel Hamilton (CBR 2008). I ran as light as possible and had a reliable bike. I'm not a coffee or 5 Hour Energy drinker, so I didn't stop that much. Riders should have their GPS wired to their bike and not battery. Some riders used auxiliary tanks, but I didn't.

Karen: Thanks, Matt. Enjoy your Cannonball and ride safe.


Tomorrow I'll have an interview with Los Angeles scooterist and 2014 Cannonballer,
Eric Almendral. 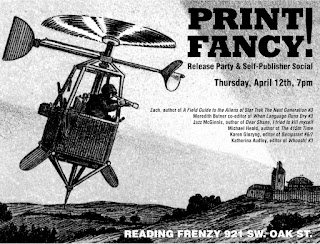 Hope to see you at Reading Frenzy. I'll be reading about my experience doing Scooter Cannonball Run.
Posted by Karen G at 5:20 PM No comments: 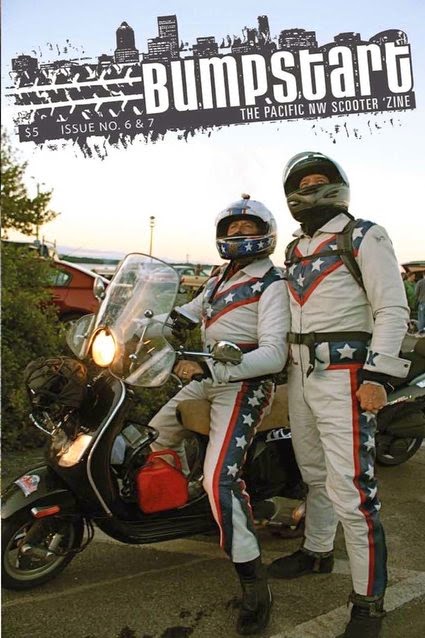 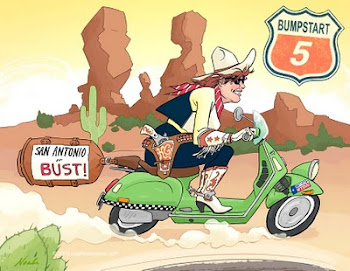 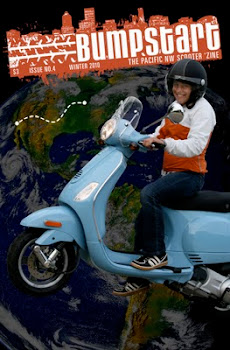 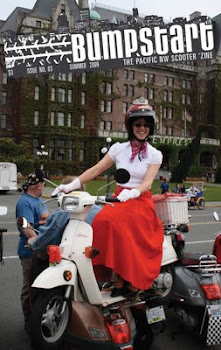 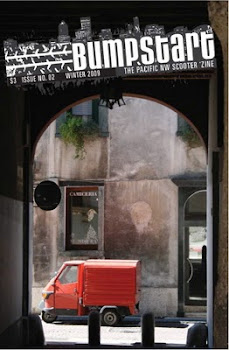 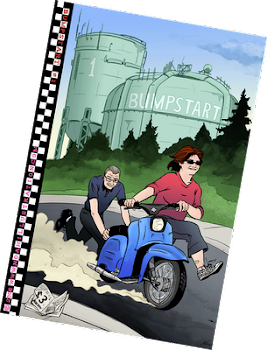